So I quit Facebook. For a week. I disabled my Facebook account and I disappeared. At least that’s what my mom thought. She immediately emailed me and asked if I had died (not exactly in those words).

And that was the point of the experiment. What would happen if I switched off the noise? Was I going to miss it? Was anyone going to miss me? Would I miss any opportunities, and fall behind on “news”? 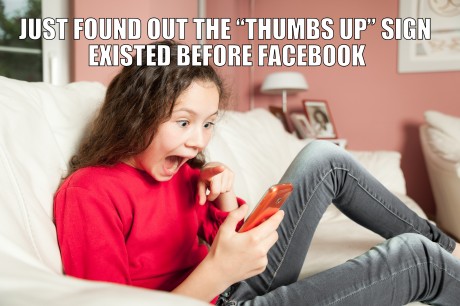 The exact opposite happened. But let me rewind and give you the full experience.

The week when Robin Williams passed away, shortly after Facebook launched the feature that notifies us when a friend publishes a “popular photo,” my head was about to explode from too much content I didn’t care much for. So I decided to experiment.

As soon as I tried to deactivate my account I got the message below. These people would miss me. Except at least one of them sees me every day… 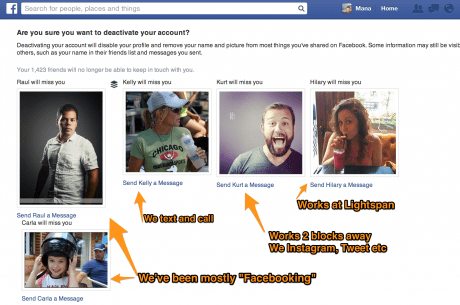 Out of curiosity I kept refreshing the page to see who else would miss me. People I interact with the most appeared frequently. Except for my mom and a friend from Kurdistan, it didn’t really seem like anyone would truly miss me. But hey, Facebook may know my friends and stalkers better than I do.

Below this friends list I was asked my reason for leaving and was given options related to Group and Apps administration. If you are the admin of a group you’ll be removed from it. If you have developed apps you must transfer their administration or delete them before deactivating the Facebook account.

Once I went through all of these, I was Facebook free! And switching over every app and group was no small task. So, one hour later I was finally Facebook free!

The Day After – Death or Hackers?

Not even a day later my mom emails in a panic. She asked me if something had happened, and asks me where else she can find me. Three days later she started a Twitter account and started favoriting everything I posted….

Next, a caring friend emailed to ask if my account had been hacked. Other than that, no one noticed. Over the next week coworkers would say, “did you see that thing I posted on Facebook… oh you’re not on Facebook.” The tone of voice, each time, was similar to discovering someone couldn’t see or hear. “Oh, you can’t see that.” Or like you’d talk to someone with a terminal illness that you can’t understand. And just like that, I was declared blind by way of being off Facebook.

At the end of the experiment one of my employees said I missed the whole Ferguson thing. I said, I didn’t. She insisted. I said, I got to see it on Twitter. Someone else intervened that it was all over the media. She said the mainstream media didn’t cover all nuances. And we left it at that.

In other words, diagnosis – news blindness and deafness; cause – lack of Facebook.

Identifying an Illness by Its Symptoms – the ABCDE of Addiction

I posted on Google+ that I was running this experiment and someone replied:  “how scary” and “I get nauseous just thinking of what you are doing.”

Whoa! Scary? Sickening? Should I be? From not being on Facebook? You know what else is scary and makes one nauseous? Withdrawal from substance dependency and addiction recovery. I mention both because the former has a physiological cause that can make one sick, the latter has more to do with the ABCDEs of addiction:

So during this time I did track my responses related to the ABCDE. A and B reared their ugly heads for about two days.  But I found that besides the habitual and mindless typing of the Facebook URL, I didn’t miss it or have any other response at all. I didn’t actually need to go to Facebook. I just seemed to instinctively go there when I needed a distraction or wanted to read news. The way some look out the window when trying to gather a thought, I’d type in the Facebook url.

Day 1 I typed the Facebook url 3 times and went to the iphone app 3 times. Mindlessly. With no real purpose. Out of the habit of filling time. I only know because my work team told me to keep track and I did.

Starting on Day 2 I tried to open the Facebook app once and then completely forgot about Facebook. Day 3 I started getting notified by different phone apps that one of my connections needed to be reset. Day 4, I couldn’t log into a shopping website where I had only used Facebook as a login. I realized that probably saved me a few bucks.

Over all I thought I was going to have a lot more fun with NOT being on Facebook. And I was disappointed. I was going to write this epic post about all my blunders. I wanted to miss it so I would have something BIG to say. But I didn’t.

Peter, Spotify Community Yoda and Bug Whisperer wrote a tutorial on how to get back on Spotify after quitting Facebook.

Half a Book Later…

Instead, in my free time I read half a book, figured out how to use SnapChat  better, got “this” close to Inbox 0 and all in all had a productive week.

1. I cannot not be on my company’s Facebook group.

a. Twitter allows the freedom to find and tune into what I want to know and learn.

b. I can talk to strangers, and it’s accepted as the thing to do

c. I can easily filter out what I don’t want to see, without having to block people and pages

3. Facebook chooses what we see and it’s a lot less of your friends’ content than you’d think. And it’s not even new content. Washington Post’s Tim Herrera did his own little experiment and discovered that close to half of the posts Facebook showed in his stream were old posts. Overall he only saw 29% of the new content produced. And even more interesting to me, 69% of the content he saw came from pages not friends. 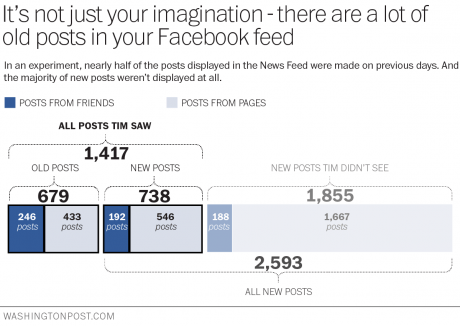 5. I gained some time back but not as much as I would have thought.

I redirected my time to other social networks. I had more time to read but I also put more time into Google+, Twitter and SnapChat. Instagram and Pinterest though didn’t get more attention. Neither did LinkedIn. Again, except SnapChat (where I just wanted to learn more about the tool itself), it may have to do with my preference for networks that allow me to find easily find other people and conversations.

The Memory that Remains…

The most impressive memory that remains was the reaction of those around me. Others who pulled the plug in the past told me they were told they’d miss it. Yet I underestimated how generous people were with their predictions of how much I’d miss it, and how much I’d miss. Some asked me how I will communicate with others. Apparently some only communicate via Facebook…

I also didn’t expect people would look at me with pity. As if I couldn’t recognize this gem that was in front of me. As if “missing out” was tattooed on my forehead.

Which made me ponder how people place value on social interaction vs. personal free time or in-person interactions.

When and how did our emotions get so wrapped up in this online platform?

As a marketer I see opportunities. Where there’s emotion, there’s a chance to instigate action. I’ve always had the ability to separate life from commerce and be analytical about it. It served me well as a marketer. So I saw no problem with mixing life updates with marketing updates. After all, walking down the street I will experience a mix of both. But now I am starting to doubt that’s quite the case with Facebook.

We are paying Facebook with our time and attention (to ads, to news, to sponsors) so we can have a sense of belonging and not missing out. Facebook’s got us all pretty wrapped up around their little finger (or should I say thumb?). Which is why no matter how much we all complain about ads, and noise, and clutter, very few of us actually stay away. We are not mixing the social with the commercial. We are in the commercial. We are kept there by way of the “social.”

It’s quite admirable the machine Facebook has built. I can’t but admire its power. And I can’t but be more mindful from now on.