When we embarked upon what later seemed a gargantuan project, I hoped to get a real sense of how brands responded to the May 2020 racial injustice movement and unrest. I was under the impression that many brands made anti-racism statements on social media, and many made a clear stand that #blacklivesmatter. But was what I saw due to my liberal social media bubble?

Our clients’ responses were mixed with some flat out telling us this is nonsense and business must continue. My very liberal social media streams were full of support messages, #BlackLivesMatter statements, commitments to read books, and the controversial black squares. From where I was sitting, the world was responding, and it was hard to find someone who said nothing on the matter.

But the data nerd in me recognized that I was inside my progressive bubble. Was what I was seeing an accurate representation of the anti-racism social media strategies and commitments of American brands?

A couple of months after we launched our survey, other consumer survey results were released.

According to a survey by the public relations firm Edelman:

And then something that confirmed what my gut feeling was telling me:

Despite what businesses have done to address racism, there are major gaps between expectation and performance in several metrics among all ethnic groups: a 27-point gap on “Create Change,” a 25-point gap on “Educate and Influence” and a 28-point gap on “Get Their Own House in Order.” ~Marketing Dive

So I decided to run a survey. We reached out to thousands of marketing executives via LinkedIn and email. It took a while to collect the data, and the response was not very enthusiastic.

First, I’m going to present the results as they are and then my editorial analysis. So let’s dive in.

To understand the difference between making statements only and statements with a commitment to change, we directed the question in multiple categories. 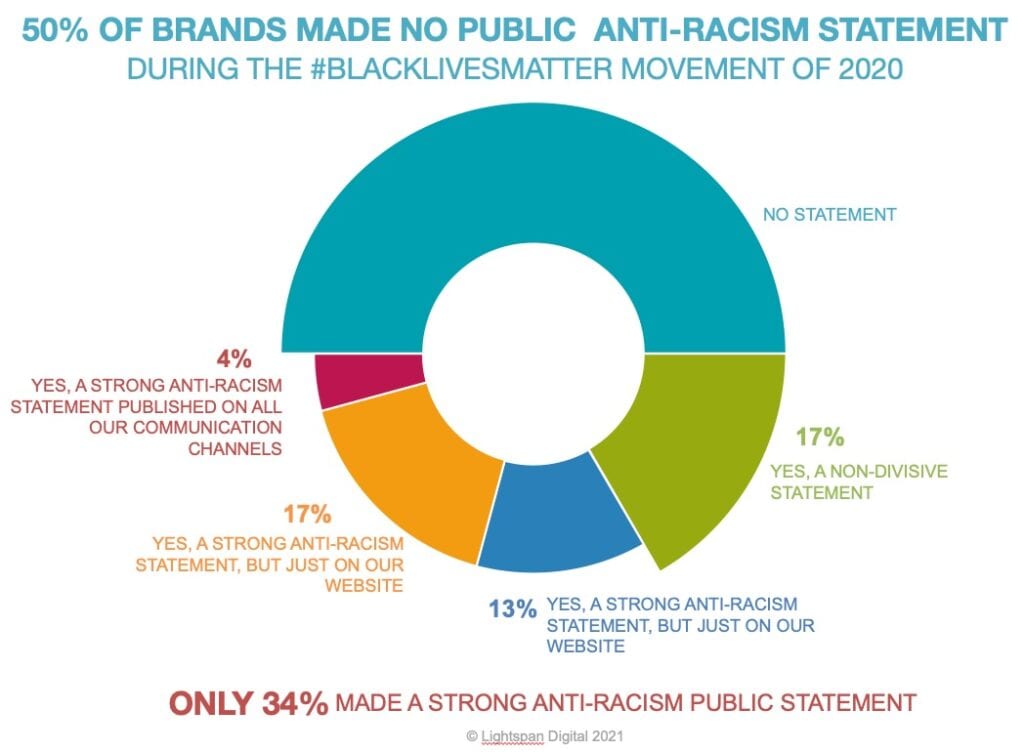 68.8% of those who made no statement reported receiving no criticism

Is it possible that no-statement did protect some from backlash? One of the shortcomings of our survey was that we didn’t ask for social media follower estimates. We were biased by the focus on response and perceived reaction, not the response by company or following size, which would make for an interesting follow up of this survey. 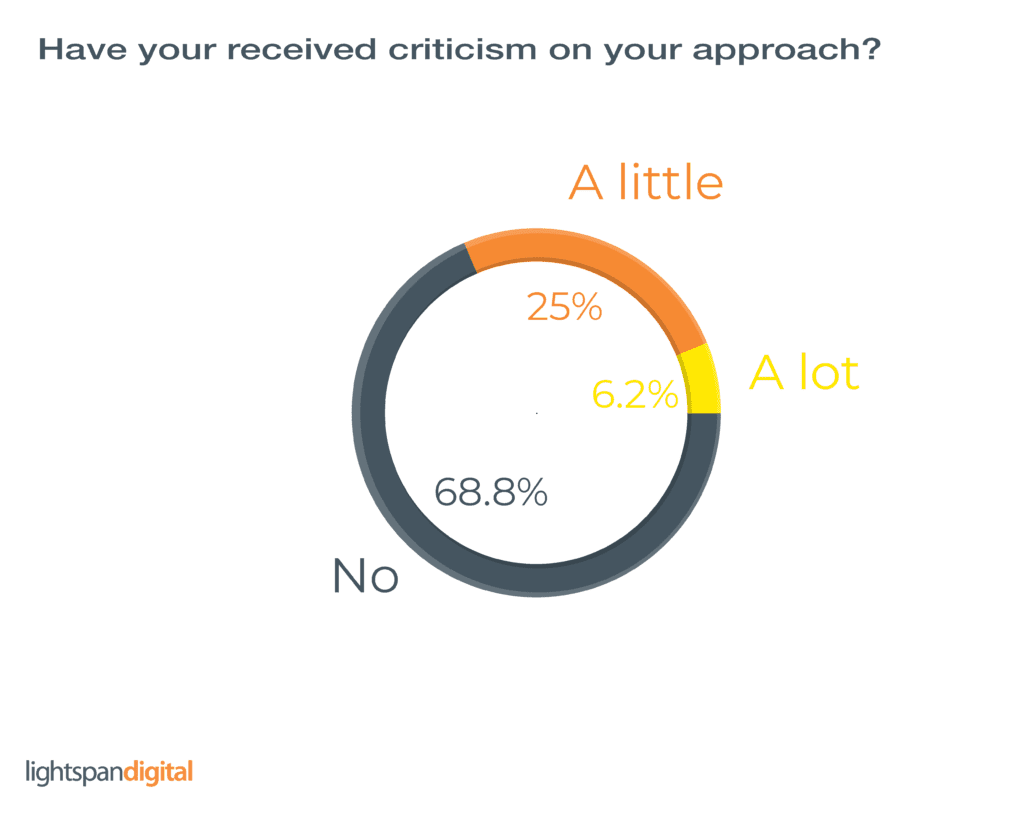 Which of the following marketing/communication changes and/or continued efforts do you see happening in your organization?

Things got really interesting with question 3. Those who did take the survey had a lot to say.

We presented a few options for answers here and left it open for responders to share their plans. I cannot present statistics here because they would not be reliable, and we received feedback that our pre-set options were leading the witness. However, a majority of those who responded entered qualifying comments, and we can discuss those. For example, 12.5% said they would make no changes but qualified it by saying that they already had plans in place, which is fair.

The authenticity category, combined with written-in responses, are leading: “Increased focus on authenticity: Aligning our marketing strategy, targeting and communication with our mission and/or amplifying our company values.” This category was followed by “focus on community,” “empathy” came in third, and “challenging internal biases” last. Once again, I appreciate the feedback that the suggested answers muddied the waters. So let me share with you some of the comments and predictions.

The participants surprised us with the number and depth of comments.

I want to extend a massive thanks to those who took the time to “fill in the blanks.” Even those who pointed to the holes in our method. At the end of the day, these comments matter more than the data. Because it’s the comments that indicate both actions and potential solutions. The numbers give us this static marker that can and will change, and that won’t drive action without each of us taking a pause, digesting, and proposing action steps.

For some of the comments received, I will take the liberty to add my commentary. I will also group similar comments:

While I assume representing diverse ethnicities in photos and imagery used in marketing collateral has been a common driver for most companies, I feel the awareness and choices made will be even more mindful going forward.

As with all these comments, I don’t know who the responder was, so if you read this, please correct me if I misunderstood. You make an excellent point that seeking to find and use representative images has been the driver. Were we lazy and superficial? I’m not sure how much brands consider words, meaning, and impact in their content marketing strategies. We had a discussion here at Lightspan recently, where someone had used an image of a black woman for a piece of content that implied confusion over marketing analytics. The question I asked was, “are we sending our young women the wrong message by portraying someone who doesn’t get analytics as being female, and a black woman at that?” Context matters.

For some of the companies from whom I have received “we take a stand against” communications after recent events, riots, and more, it seemed like a forced message. Meaning, there was such a mass outpouring of companies making a statement, and sharing their position, it seemed more of a reaction “we must send a message to” rather than speaking to their specific connection to impacted groups and communities or their specific actions about what they will do to show their hand toward social justice. I was able to see the pattern of “every other company is making a statement so we should too”, rather than any meaningful message containing action plans.
Marketers will feel the desire to respond because people expect them to – not the right thing to do. People will respond because others do.. Marketers are lemmings. They do not seem to understand that responding to issues is a function of the brand, the role it plays, what it stands for and in what context is the brand identified with.

What you are expressing here was why I wanted to talk to more companies about their approach. We only got to see the loud approaches and then the copy-cat approaches. Were there some smart, effective, interesting ones we missed?
I got criticism for being in the pause-listen-then act camp. But I will stand by it. When a community expresses their grief, I will wait my turn. I refuse to make attempts at forcing the spotlight my way. But also, waiting forever is not the answer. Pausing with the intent of acting is the most helpful approach.
Another thing I found interesting was that many brands just made one statement, one social media post. I didn’t see continued communication strategies. It was as if the world decided to drop punctuation marks on their Instagram page canvas and then moved on.
However, others continue to roll out programs. You can find a tracker here: https://adage.com/article/cmo-strategy/regularly-updated-blog-tracking-brands-responses-racial-injustice/2260291

As Mana says, our messages and tactics must be purpose-driven. I truly hope that companies adapt their communications based on purpose rather than obligatory statements.

Thank you for the kind words. And this is how I also realized that I dropped enough content on my social media accounts during these events that made it clear where I stand and probably affected the results.

It really depends on the industry but I don’t forsee any significant changes to marcomm in general.
Short term people will change or hold off on regular way of doing things. Longer term, people tend to revert back to the mean (old ways of doing things). My hope is that real change comes, but not 100% optimistic.

I worry that there will be a lot of virtue signaling. I am hopeful organizations will follow Unilever in making real changes.

Faster, rawer and more ‘real’ for some and even more controlled and tone-deaf on the other extreme.

Ouch! But you (all) may be right. It does appear that the events came and passed, and most brands went back to their standard content calendars. I advise all marketers to use this time and create new processes. Even simple things like creating a checklist for their content could go a long way. You could add questions such as:

I actually think any marketing communications professional in-tune with the world was already heading in this direction — more thoughtful and inclusive content — well before recent events. I imagine recent events may accelerate them, as well as make inclusivity not just for big brands, but a requirement for even small brands or B2B orgs.
I think you are already seeing a concerted effort to be sensitive, empathetic and genuine (although not always successful). More nimble and less produced communications are likely but may contribute to the authenticity and resonance of the message.

The “small brands vs. big brands” point here is important. I’d argue that the small brands that live up to higher social justice standards do a much better job expressing that in their marketing than big brands. When it comes to big brands, it’s usually the same select few who make the headlines for their progressive marketing. I’m sure you can name a few. Patagonia and Nike, anyone?

I believe the focus on Diversity, Equity, and Inclusion will continue to amplify both in direct messaging about social justice issues and in how marketing is conducted. Brands that have continued to rely on primarily caucasian models for photography and conventional gender lines will continue to be challenged and taken to task on their thinking. Continued silence on DEI and social justice issues will increasingly be noticed and called out, making it tricky for some brands to navigate. The bar will continue to raise here. Topics rising in interest like which holidays a company chooses to celebrate, the make up of it’s Board of Directors and Executive Teams, and it’s hiring practices will continue to become hot button issues for many, resulting in increased media coverage and the possibility of missteps on the PR front.

This is an optimistic and comprehensive view. I do hope we don’t lose the momentum. But I am afraid without substantial commitment and plans, companies will continue to be behind where they should be and should have been for a long while now.
And other:

We’ve received strong internal pressure to take a stand in favor of DEI principles in the current crisis and many members of the marketing team and leadership would like to, but we don’t have green light from executive leadership.

I think companies need to be genuine – if you take a position but then your actions don’t back it up, you will lose credibility.

Since last May, I spent quite a bit of time trying to understand how we got to this place in history. So ultimately, this study could not be 100% objective because of my bias. One statement stayed with me in my reading and it was instantly and permanently burned in my memory.