Before you can use Snapchat and other new social networks for business, you have to understand WHY teens and young adults are abandoning Facebook in favor of these “younger” social networks. In this two-part article we’ll first explore what motivates the migration, and then how to turn that knowledge into Snapchat marketing ideas. If we can understand why, we’ll know how to use new tools, such as Snapchat, for business.

Teens, in particular, are leaving Facebook at an estimated rate of a million a year. What do “younger” social networks offer that Facebook doesn’t?

[bctt tweet=”Teens are leaving Facebook at an estimated rate of 1MM a year. Here’s why:”] 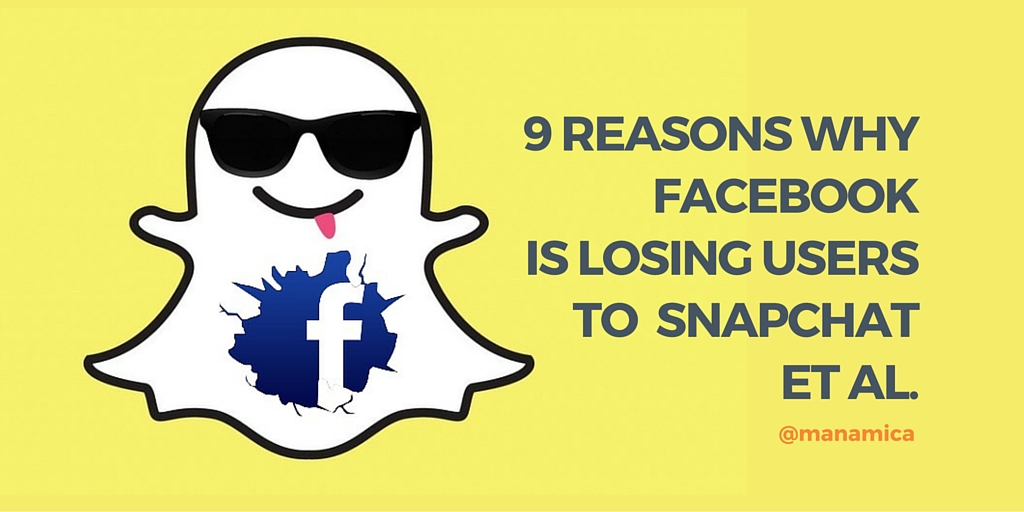 9 Reasons Why Facebook is Losing to Younger Social Networks

Those who abandon Facebook commonly report that they were sick of seeing the rants and/or boastful posts of their “friends.” There’s too much noise forced upon you. The default view is part of the problem. The moment you log in or open the app you see the news stream, or “the wall” as some call it.

You have to remember that Facebook was a place for friends. But then it became a place where friends overshare and advertisers intrude. It’s no longer “my Facebook.” It’s “their Facebook.” As some teens described it, it’s not real life.

By contrast, the younger apps try to keep it “real.” When you open Snapchat it defaults to its core function – the camera. It directs you straight to the action you want to take – capture and share a moment. Your friends may be sharing updates, but they’re not the first thing you see when you open the app. You can access the updates if and when you choose to. 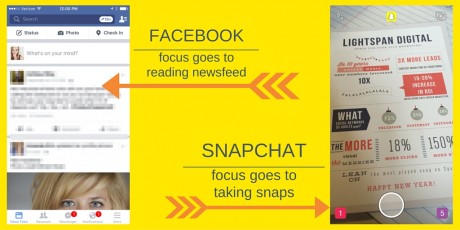 In 2010, Mark Zuckerberg said privacy is no longer the “social norm.” Since the dawn of blogging people have been sharing intimate moments publicly, at an increasing rate. If you look at Facebook’s “On This Day” feature you will be surprised by the trail of personal information left behind – from people you met, to places you visited, to things you like, dislike and discuss.

You may look at teens and young adults’ actions and find it paradoxical that they share so much on Instagram while also looking for privacy in the “young” apps.

Snapchat and WhatsApp don’t store any information on their servers. The only traces are on your phone and on the recipient’s phone. Snapchats, the messages you send to individuals, disappear after they’re “read.” Although with recent updates you can “save” a message you receive, most snaps are still transient.

But there is no real privacy on social media. What you’re experiencing with Snapchat is intimacy. A private, cozy atmosphere.

[bctt tweet=”Snapchat’s appeal comes from a sense of intimacy. A private, cozy atmosphere.”]

Even when sending snaps to multiple recipients, the next interactions are still one on one. The responses don’t go to a group chat, they come back to just the sender. You may have sent the message to 100 people, but each of them will respond just to you. Each response represents individualized attention, which is very flattering.

While the Snapchat, Kik, and WhatsApp defaults are one on one communication, the Facebook default is a “news stream” (as discussed above). So you can see how polarized these options are. [bctt tweet=”If you want loudness, you go to Facebook. If you want intimacy you choose one of the “young” apps.”]

Want to appeal to the younger audience? Figure out how your brand can offer intimate interactions. Be prepared to share a lot of behind-the-scenes content, and be vulnerable. We’ll explore this further in part two of this series.

The drive for privacy doesn’t necessarily come from the need to hide, or share less. But rather from the desire to control how you appear to others. In an age where we compare ourselves to the carefully manicured social media self-portraits of others, there is a lot of pressure to look good. So, when posting content that lasts, to wider audiences, such as Facebook, Twitter, Instagram, the stakes are higher.

On This American Life’s “Status Update” episode, three teenage girls disclose that they poll  friends before they choose which selfie to post on Instagram. They use the feedback to choose the best looking image. They choose the image that will give them the most hearts and comments. These youth are the smartest marketers of all. Their shots are filtered, and tested before they’re posted.

Snapchat offers the most control. You choose who sees what. Until recently, the only way to save a chat was to screenshot it. And you are notified if that happens. There are notifications and indicators of who opened your chat, who read your stories, who took screenshots. These all add a sense of knowledge and thus a feel of being in control.

The fact that the “young” social networks make the personal space the default space when you access the app, also leads to options. When you open Snapchat you are not “forced” to read a stream of content from other people. With Snapchat, WhatsApp, and Peach, you must actively choose to look at a person’s messages and updates. They don’t appear in a stream, news feed, or wall. To see what’s been shared you tap a friend’s name. 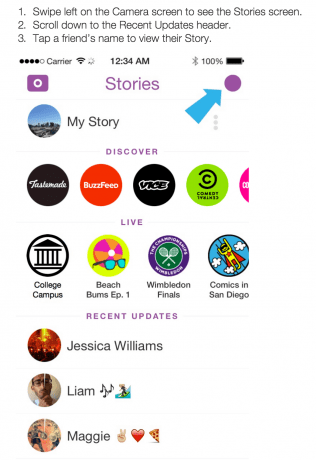 So if you don’t want to see it, you won’t look.

Additionally, you can choose to save the content you snapped, or let it live its short Snapchat life. Many love this feature because the many images and videos we take and store on our phones are becoming a burden. With Snapchat you can share stories and moments without saving them to your camera roll. If an extraordinary moment happens, you can save it after you shared it.

Many who have tried Snapchat found it hard to figure out. You may feel clumsy at first. That’s because SnapChat breaks usability conventions. There are few icons to indicate what the functions are. Many functions are signaled by changes in the colors of a button, or of text. Navigation is done by swiping, not just up and down, but right and left as well (which is becoming more common in app user interfaces). 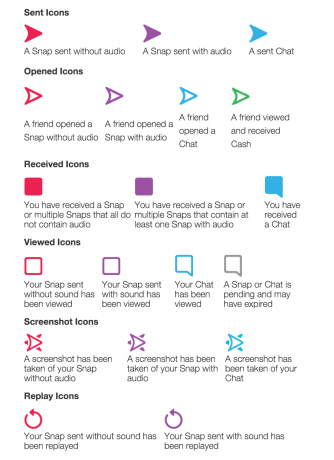 What throws us off is that we’re used to the busy Facebook interface. By comparison, Snapchat looks bare-bones. You open the app and it looks as if you’ve accessed your phone camera. It’s a very simple design. Tap – swipe – tap. Or hold (to take a video you hold down the snap button).

Here, you can see the difference. The moment you access the app, the Facebook interface gives you 15 possible actions (if we account for only one piece of content being visible on the screen). Snapchat gives you 6 visible actions and 2 actions possible by swiping. Instagram offers 9 possible actions after you open the app.

The other teen favorites, Kik and WhatsApp, look like chatting apps. They’re simple and familiar. They can be easily compared to the SMS features on a phone but with the added benefits of being able to broadcast messages, create groups and more. Especially on Kik, the “bells and whistles” can be many, but come as add-ons.

Text is a second-thought for the “young” social networks. As I mentioned earlier, the default view for Snapchat is the camera. Text is limited to 31 characters, although there are hacks that allow you to write more. But few use them because the text is supposed to punctuate the image, not the other way around.

It’s normal for teens and parents to get defensive when reading these studies. But well-collected numbers never lie. Text alone is losing in favor of visual storytelling. And there is nothing wrong with that. But as marketers, we should listen to the data.

Pay attention, the fastest growing social networks are the ones that put visuals first. Pinterest is first, followed by Tumblr, and Instagram. Facebook is last and in fact has been losing active users. 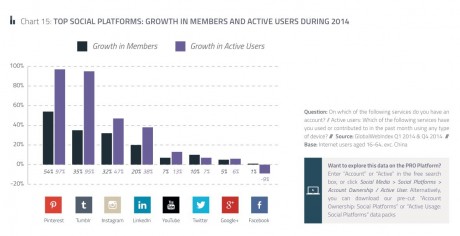 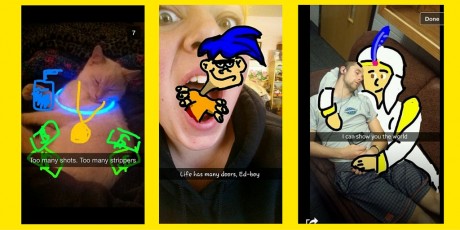 Drawing, emojis, and text overlays are features that unleash creativity and make the “young” social networks fun to use. Facebook and Twitter are full of repeat content and much of the shared content is not original. On Instagram and Snapchat you can’t natively reshare others’ content. These networks challenge you to be creative.

[bctt tweet=”Snapchat appeal: You can’t natively reshare others’ content. You’re being challenged to be creative.”] 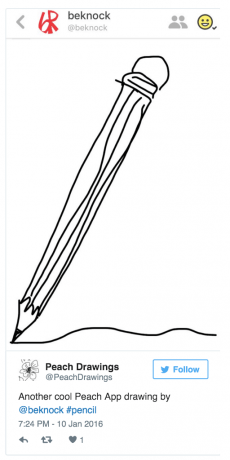 7. They’re All About Gamification

Once you play with Snapchat for a bit you realize the “secret code” of the motions is addictive. Like a good game. The platform adds some mystery by skipping the labels and using only icons. The new kid on the block, Peach, also does away with labels.

The lack of explanatory text encourages you to play around and discover, by yourself, what each swipe or tap does. There are numerous articles that unveil Snapchat’s hidden features, or you can play around and have your own treasure hunt.

Snapchat even gives you a score, which many have tried to decode, but may be as simple as a tally of the snaps sent and received. For a bit of competitiveness, you can see your friends’ scores as well. There are even trophies you can earn.

Another fun game element is that you can add other Snapchat users by snapping a picture of their account icon, as you can see below. Go ahead, try it! Many brands are adding these images to their Twitter profiles and websites to make it easier for their audiences to connect with them. 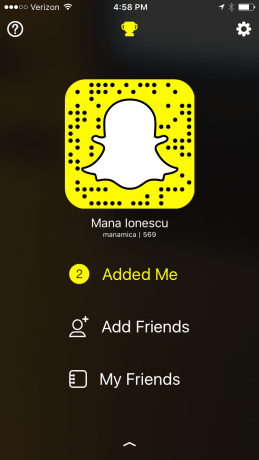 8. They Have that Real-time Feel

Instagram was supposed to be Insta – gram. It’s no longer insta. Younger users are seeking a sense of “real life.” Remember, Facebook is not like real life, according to teens. Capturing and sharing the moment when it happens, and then letting it disappear is more like real life.

You’ll notice Instagram, Snapchat and Peach don’t let you reshare others’ content (of course, there are hacks for everything). It has to be real, not rehashed or recycled.

For us, marketers, this is going to be one of the biggest challenges, not just with platforms like Snapchat, but with Instagram as well. It takes agility and creativity to share content that looks fresh and genuine. But that’s what the new social networks demand.

This next statement may hurt, but most parents already know this.

“It’s hard to look cool when you’re hanging out with Mom and Dad,” says David Ebersman, the former chief financial officer for Facebook.

Cnet’s Jennifer Van Grove writes, “Around schools, kids treat these apps like pot, enjoyed in low-lit corners, and all for the undeniable pleasure and temporary fulfillment of feeling cool.”

The doodles, the “secret codes,” the gamification elements, all add to the coolness factor. While to many of us that may seem like fluff, to fans of the younger apps, these features are powerful motivators. You want to get these youth involved with your brand? Run a contest – ask them to doodle a snap of your product packaging for you.

We could go into a lengthy discussion of what’s cool or not but it’s irrelevant. Cool, doesn’t need an explanation. Cool is in the numbers. And if a group tells you something is cool, it’s cool. Right now, Snapchat, Instagram, Kik, WhatsApp and even Twitter are cooler than Facebook.

The reason I went through this review of why young social networks, such as Snapchat, have appeal is because we have to understand what motivates our target audiences before we market to them.

In part two of this series we’ll look at how your business can use this knowledge for marketing on Snapchat.